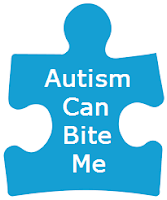 It was a rough night in the Slacker house. Autism and teenage-dom combined to beat me and MC down while not making Bubba any happier either. These incidents make me weary. Just exhausted. And you know what kept going through my head during all of it? I hate Autism. It truly sucks.

April is Autism Awareness month but I wonder if there’s anyone left in this country who isn’t aware of Autism. Between celebrities like Jenny McCarthy and shows like The Big Bang Theory, Autism is out there. I imagine it’s a trending “alternative lifestyle” at the moment. After all, who doesn’t want to hang with Sheldon Cooper?

If t-shirt and meme manufacturers are to be believed, I am supposed to be grateful for this wonderful journey we are on. After all, it’s a “blessing” to have a special needs child, and I am apparently a warrior mom chosen specifically by God for my awesome parenting skills and then “gifted” with an Autistic child. If only the “best” moms were given children with special needs, what does that say about all the other moms? Does someone actually think God is sitting there saying, “Betty Sue is only going to be a mediocre mom so she only rates a neurotypical child.” Please.

Let me tell you the reality of being a mom of a special needs–oh, I’m sorry, I think the PC term now is “differently abled”–kid. The reality is that I get so frustrated that I want to tear my hair out, scream, throw things, stomp my feet in a temper tantrum, cry. The reality is that I do these, sometimes all at the same time. The reality is that my child will never be able to hold a job, live on his own, or even get his driver’s license. The reality is my heart breaks constantly knowing he doesn’t have a single friend because people think he’s weird. Those that genuinely care and make an effort, he rebuffs. The reality is that he no longer trusts adults because he sees them as a symbol that he’s in trouble. The reality is that getting him to bathe, brush his teeth, eat food that doesn’t go from freezer to microwave, go outside, or even leave the house are battles that sometimes I just can’t handle fighting. The reality is that his brother and sister tolerate him because he’s family, but they never choose to do anything with him, and they don’t have his back when they’re out.

And I’m one of the lucky ones.

You see, Bubba talks. He can use the bathroom and shower independently. He can get his own food; 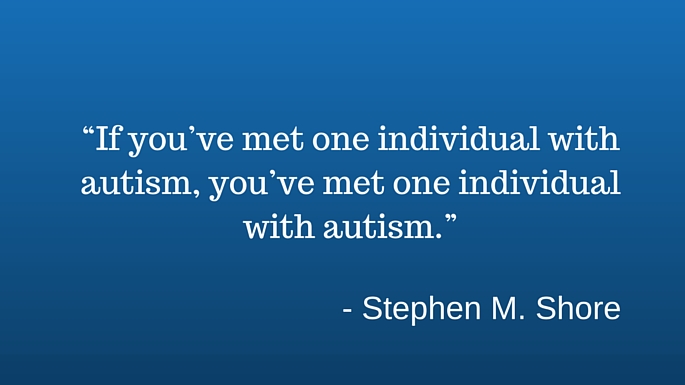 he can eat regular food. He sleeps through the night. He makes eye contact. He understands sarcasm and is sometimes empathetic. He’s fully integrated at school. He likes physical contact and often wants to snuggle with me. He’s no longer violent. Autism robs kids of a normal life. It robs them of friends, acceptance, peace, communication, and independence. And it can rob parents of seeing their kids smile, hearing them laugh or saying “I love you”, and of the simple things like hugs.

Oh, but think of all you’ve learned! Yes, I’ve learned to be patient while my son screams for hours because he doesn’t want to write or he doesn’t want to do his chores the way we want him to. I’ve learned to be ready to leave any event if he throws a fit or it’s just a sensory overload for him. I’ve learned to put aside my dreams of him getting married and having children or even just having a close bond with his siblings. I’ve learned to ignore the looks I get when my 5’10” 16 year old wants to hold my hand and snuggle in public…and when he acts like a toddler who didn’t get what he wanted. I’ve learned to paste on a fake smile when well-meaning people offer advice that worked for them with their kids. The “you really should try…” and “…THEN he’d straighten up” little nuggets of wisdom that make me laugh–I’ve learned to keep quiet and just offer a polite thanks when they’re shared. I’ve learned that traditional doctors know squat about Autism and specifically my child, and I’ve researched and studied more treatments and therapies than I ever thought possible.

But I have also learned to put Bubba in God’s hands. It’s the only things that’s kept the two of us alive.

So you can have your Autism Awareness month. I live it–24/7, 365. I’m aware. It IS a journey, it IS an adventure, and we celebrate every single milestone and accomplishment my sweet child makes. Would I trade him in or wish for a different child? Not on your life. I thank God every day for Bubba; that kid brings me incredible joy and he can light up a room. But would I take Autism away from him if I could? In. A. Heartbeat.