0 shares
I can’t believe I’m going to admit this…okay, I can. I mean, what DON’T I share in a public forum…Anyways. We just had to de-louse everyone. That’s right…head lice. We’ve all heard the same lecture about how it doesn’t matter how clean you are and it’s just highly contagious, blah, blah, blah. But you know when you hear someone has head lice you get all creeped out like they’ve just crawled out from a sewer somewhere and are just waiting to infect you with their disease. Rationally, I know “hey, it happens” but inside I’m still a little skeeved out.

It turns out that it’s being passed around between the Four Horsewomen of the Apocalypse…uh, I mean, Sassy and her friends. Who knows where it originated–school, church, family, practice, there’s just no telling. But Sassy was at least the 3rd girl in her class to get it that we know of. And how did we discover this? As I walk into the hair salon with my 3 little minions in tow, Sassy tells me that her friends picked a bug out of her hair in the lunch line and told her it was head lice. And they know this because they both just got rid of their own lice. Ewww!!! “Turn around, we are leaving RIGHT. NOW.”

Sassy had been complaining about an itchy head but my kids have always had a tendency toward a dry scalp so I didn’t think much of it. I just chalked it up to the fact that she is showering herself and figured she just wasn’t rinsing out all the shampoo or something (hey, it made sense to me). So we go home and I scour everyone’s scalp. The boys seem fine but Sassy has a 3 ring lice circus going on. Great. I show Howdy what to look for so he can check my head but he doesn’t find anything. Whew! Then I call “I”‘s mom who had just been telling me that afternoon about their lice ordeal. She offered to bring over an unused lice remover kit she had leftover and commiserated with me. Just in case, though, I made her go through my hair when she got here. “I see a nit,” she announced. WHAT!? Really? Oh, man. It figures.

I went my entire childhood without head lice and now I’ve had it twice since having kids. It broke out around us when Bubba was a year old and out of the 4 of us, we were the only 2 to get it. At the time, he’d never had a haircut and had the most beautiful curls. I didn’t want to have to deal with trying to keep a one year old still while I picked through his hair so I shaved it all off. My hair wasn’t quite as easy to deal with. Now, 10 years later, I’ve got to do it again. The only positive thing about this is that we cut off Sassy’s waist length hair a few months back and only have to deal with hair that’s just past her chin. 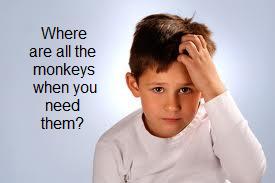 I gave her the full 3 step treatment and made everyone else wash with the special shampoo. Then MC helped me pick through my scalp and it reminded me of those monkeys who groom each other and pick out the bugs. What followed next was a frantic but thorough scouring of the house. Twelve sealed bags of pillows and stuffed animals, 13 loads of laundry to wash the bedding and linens, a run through the dishwasher of all combs and brushes and hairclips, $29 in shampoo and spray, and we are a lice free zone. Of course, knowing we are lice free hasn’t stopped us all from compulsively scratching our heads and I am still completely grossed out over the whole thing. I’ve told my kids to start drying their hair with a hair dryer after every shower and reinforced the “do not share brushes or hats or hair accessories” rule, especially since they have actually seen the consequences now. I just hope it doesn’t come back…EVER! In some cases, the third time is definitely NOT the charm.