0 shares
I realize it’s the day AFTER Father’s Day, but is there ever a bad time to praise your daddy?

I’m not close enough to hug on my dad on Father’s Day, too far away to enjoy a nice dinner with him or offer him a present, and he will never be on Facebook, but what I can do is share with everyone all that he’s done for me as I’ve grown up. 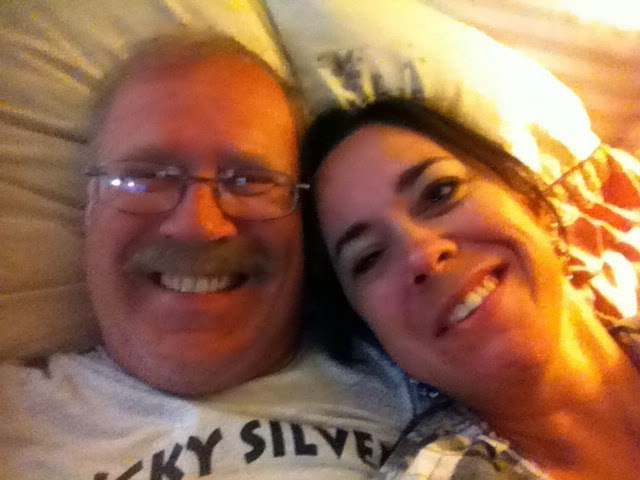 There’s something different about fathers and daughters. As a little girl I loved my daddy and wanted to grow up to marry him. I grew up with 2 sisters so that means my dad–the man who lives for hot rods, racing, and rock’n’roll music–was surrounded by females. He was never a have-a-fake-tea-party-with-the-girls kind of guy (although he’s mellowed out quite a bit with age and grandkids), but there was never any doubt that he loved us.

Some of my best memories of my dad are the two of us curling up in his puke green vinyl recliner to watch Star Trek, Kung Fu, or Mutual of Omaha’s Animal Kingdom together. I would sit through the most mind-numbing shows or watch animals being slaughtered and eaten on the Savannah because it meant I got to snuggle with my daddy. Sometimes us girls would pull out the sleeping bag and he would let us take turns sitting on it while he pulled us around the house for a crazed, bouncing off the walls roller coaster ride.

My dad always made sure there was plenty of room in the animal graveyard for our deceased pets (and there were plenty). He gave us rides on his scooter that, to us, felt like a daring motorcycle ride. He never failed to try to cheer us up when we were crying over the latest break-up–no matter how awkward that may have been. Because he worked at home, he was the one we called to pick us up from school when we were sick, bring us lunch money, or even bring up an emergency stash of “girl supplies” when we weren’t prepared. He’s the kind of guy that will give you backhanded compliments that you just accept in the way they were meant because you know that his heart was in the right place.

One year on Valentine’s Day, my dad brought me and my younger sister (my older sister was already out of the house) a plastic heart-shaped box filled with tiny, heart-shaped Red Hots. I can’t stand cinnamon candies but that remains in my list of Top 10 gifts I’ve received because it was a Valentine from my daddy. I actually pick up a present for CJ to present to Sassy on Valentine’s Day each year because of how special that one little box of candy meant to me. It was probably just a spur of the moment purchase he picked up from the gas station, but to his daughter it meant the world.

My dad has always been fun, from his loud rock music and love of dancing, to his race car and much younger friends. But I think the one thing that has always stood out more than anything else is how much he loves his family. My dad taught us at a young age that nothing was more important, that nothing should ever come before family. And while he did give us speeches that said the same thing, I learned more from his actions, his willingness to do whatever it took to take care of his wife and daughters than anything else. He would give you the shirt off his back and then offer his pants as well if that shirt wasn’t enough.

It’s hard to be so far away, to not be close enough to tickle his feet or kiss his stubbled cheek, but if there’s one thing I’ve learned it’s that if I ever need my daddy for anything, he’ll always be there–no matter how far apart we are.