0 shares
I’ve decided to make my Flashbacks an every-other-Friday kind of thing because I always have too much to say and not enough time to say it. So this week instead I will bring you some news.

I am officially a Texan.

OK, I know I moved here in May of last year, I have a house and, at one time, I was even employed here, but it’s really not official until you get your driver’s license. I believe the law states that you are supposed to get it within 6 weeks or some nonsense like that, but the law doesn’t take Slacker Standard Time into consideration. I didn’t want to get my license with my in-laws’ address on it so I had to wait until we got a house. Then I was told that I couldn’t get a license until my van was registered, but I couldn’t get it registered until it passed inspection, which wouldn’t happen until it was repaired, which had to wait until we had money. You know, one of those things.

Ten months later, Suzy has given up her beautiful Mt. Rainier license plates and she’s now sporting brand spankin’ new plates with the TX state outline and colors. The kids were a bit worried that without her signature “Suzy” plates they wouldn’t be able to find her in a parking lot but I assured them that there aren’t a lot of purple mini vans out there. That meant it was my turn. I did the requisite hair and makeup and endured the soul-sucking pit that is the DMV. I never quite understood why people were so against the institution. Yes, there are always long lines, and yes, they employ some very…colorful characters but it’s not all that bad. Turns out I just wasn’t visiting the right DMV. I now understand it all. The cracked, concrete floors and the matching grey walls; the hard, plastic chairs crammed tighter than the seats in coach where you will inevitably be seated next to the screaming baby; the bark of the lady in the information line who informs you that, after standing in line for an hour just to get a number, you don’t have the right paperwork and you’ll have to come back; the cesspool of germs that is the waiting room where people with questionable hygiene practices–and even more questionable fashion sense–cough and hack and wipe their noses with the backs of their hands; the vacant, glassy eyes of the employees behind the counter who have long since given up hope of escaping the pit. It all makes for a very depressing way to spend an afternoon. 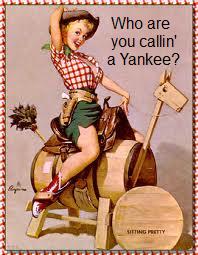 But I survived. And after giving up my WA license (*sniff, sniff*), I was given my temporary TX one until the real one arrived in the mail. And now it’s here. I’m happy to report that I ended up with a good picture even though they made me take off my glasses leaving me less than clear on where to focus. At any rate, I will never be embarrassed to whip that thing out (unless I’m having to pull it out to show a cop). And now that I am a Texan once again, I’ve decided it’s time for me to embrace my new status. Instead of complaining about all the things I don’t like about TX, I am going to share with you the things I do like. It’s not a huge list but I think I should get extra credit for the effort.

1. The big, open skies.  Even here in Mesquite where there are trees and the occasional hill, the view of the skies is unobstructed. This means that when the sun sets, you get a panoramic view of red, gold, pink and purple skies. At night, the stars are endless, just a solid canopy of twinkling lights. And when a storm comes in, even if it’s miles off, you can watch a dazzling show of lightning from the safety of your livingroom.

2. The bluebonnets.  The bluebonnet is the TX equivalent of the tulip in WA. You can’t grow up here and not get spring pictures taken in a field of bluebonnets. And they grow crazy along the sides of the highways so as you’re out driving, you’ll find people pulled over taking pictures of their kids all dolled up in their spring best. Just don’t pick them and try not to trample them in your quest for the perfect photo op–as the state flower, there are penalties for destroying them.

3. The restaurants.  I’m not a big BBQ fan and I don’t eat Tex-Mex, but what I do like is Chili’s and The Black Eyed Pea. MC and I used to drive an hour to get to one of the only Chili’s in WA but then it closed down. Now the only one left is in Spokane which is on the other side of the state. I’m happy to say that I now live within 10 minutes driving distance to both. TX also has CiCi’s pizza, which always reminds me of the old Godfather’s restaurants. They don’t have the best pizza but they do have the best cinnamon rolls that aren’t baked by my mom. It’s worth going to the buffet just to fill up on those!

4. The people.  All of MC’s immediate family is here–brothers, sister, nieces and nephews, and Dad–and his extended family is close–Grandma, aunts, uncles, cousins. I love to spend time with them all. They are the ones who introduced me to Nertz, Canasta and Chickenfoot, Oreo balls, co-ed softball and Firefly. They are my family away from my family. We also have a great network of friends through church and even work. They all–family and friends–make living here worthwhile.