0 shares
After years of dreaming, months of saving (then spending that savings and having to save it again), hours and hours of online research, and even a trip or two to look at our prospects, we finally bought a new car.

But have no fear, it was not a standard, boring business transaction. Oh no, we certainly can’t have that. Because if I have to do something like buy a car, it can’t be normal. It has to be (all together now) an adventure. Which is really just code for, “Am I being Punk’d?”

I had an inkling of what was to come when I got a phone call the other day. MC and I had applied for financing online for this one particular car lot we’ll call The Lot (I know, creative genius, right?). The next morning I got a call from Bob. Let me clarify Bob. This was not “Bahb” who will scratch his belly while watching “da Bears”, this was “Bobe” (pronounced quickly and succinctly) who looks like Eugene Levy with a bushy mustache and speaks like Chirag from the Diary of a Wimpy Kid movies. Are you with me? Ok. So, I answer the phone and he identifies himself as being from The Lot, which I knew we had applied at. Then he asks for Paul. Now, I generally don’t use real names but I am going to make an exception here. MC’s name is not Paul–it’s Chris. Seeing as how I was sort of expecting this call, I went ahead and made the necessary correction, “Do you mean Chris?”

I was so not impressed with my introduction with The Lot but since we might end up with another car company, I wasn’t too worried. Fast forward a few days and we pull into a car lot to test drive (and hopefully buy) a van we saw online. As we walk into the office, a man comes out and says, “You must be Chris? I am glad you are feeling better.” Nooooooo! My eyes shoot over to MC with a mix of disbelief and alarm. We’re seriously going to do business with Bobe?! This better be a reaaalllly good car.

As he gathers the keys, he informs us that the car we really wanted has been sold but our other inquiry is still on the lot and, by the way, there is now a third one as well. At least we have options, right? And just so we were aware of how new the vans were, Bobe repeatedly pointed out that one was an “oh-ten’ and one was an “oh-eleven”. (Am I the only one who finds this not only wrong but highly irritating???) Stepping outside we go to the van, open it up and try to check out the interior. Given that it was now 6:00, it was too dark to see anything and the interior lights didn’t come on. And when MC tried to turn the key in the ignition, we discovered the battery was dead. Not a good omen.

But not to worry, Bobe saved the day. As he explained, “Dees cars, you leave da lights for a week and da battery, it does not work.” Noted. He was able to jump off the battery and get it going for us. We looked it over, tried out all the seats, fiddled with all the knobs, and then away we went. Once away from The Lot, I felt a little better. The car drove really nice, it had lots of bells and whistles (you know, like A/C and heat, windows that roll down, and a radio), and was in great condition. Yay!

Back at The Lot, we ask Bobe if we can test drive the 3rd van and he then informs us someone is on their way to (possibly) pick it up. Seriously? We weren’t gone that long. Did you not feel like mentioning that we had our eye on it as well? But whatevs. We liked the one we test drove. Even though we now found out it was $1000 more than the one we came to look at originally.

Of course it was.

But it did have everything we wanted, the price was still good–even with a warranty, and they were willing to finance our less-than-stellar credit. Deep breath, try not to hyperventilate, “We’ll take it!” 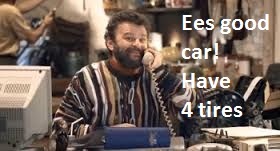 And so began the hour and a half process of watching Bobe type at his computer and then wander around the office asking questions and searching for his stapler. We came to the conclusion that Bobe was trained at the “Hello, my name is Peggy” school of customer service. After comparing the 2 warranty options, we asked if he knew what the difference was. Big mistake. He then took the brochures and proceeded to read aloud what each one offered. Dude, seriously! Did you not see us doing the exact same thing just a minute ago??? After letting him recite a few lines and sharing “you have GOT to be kidding me” looks, MC interrupted with, “We’ll take #2.”

This whole time, I’d been bouncing around in my chair like a 5 year old hyped up on Red Bull and off her Ritalin. Leg bouncing, foot tapping, eyes rolling, head bobbing, arms flailing randomly. The stress of adding another bill combined with having left my phone with the minions and my book in the car couldn’t compete with the Addled Tortoise From India and I was ready to bounce off the walls. MC just sat there silently chastising me.

When MC starts to lose his cool, something is going wrong. (Or right, depending on how you look at it. I found it highly entertaining and a very good distraction.) When Bobe would stop for a breath, MC would butt in with, “That sounds fine. We’ll take that one.” Only after the 3rd or 4th time and MC raising his voice just shy of a growl did Bobe finally catch on.

The rest of our time there was an exercise in patience and loving your fellow man as Bobe kept pronouncing our last name as “Tarp” instead of “Tharp”, couldn’t figure out what to do about the odd spelling of MC’s name, lost his stapler–twice, kept pointing out that the van had power seats (only on the driver’s seat but he chose not to catch our correction) and generally tried his best to not listen to us.
“Do you want 60 months or 48 months?”
“We want 48.”
“We also offer 54 months.”
“We want 48.”
“Here is the price for 54 months.” Grrrr!

But in the end, we became the proud owners of a fully-functioning, good-looking mini van that is only 3 years old and comes in a sparkling, metallic, Seattle Seahawk blue. Oh, and we are also the owners of a contract signed in blood wherein we pledged to pay out in sweat, tears, and our very souls for the next 48 (NOT 54) months until the thing is paid off.

(Editor’s note: MC pointed out that since we were buying a Dodge at D**** Imports, it must be the employees who were imported and not the cars.)