0 shares
Today’s Flashback pains me to tell. It happened about 16 years ago, during our first year of marriage, but it still causes me grief. Perhaps because it not only proves how much Murphy loves us, but it also reflects so poorly on our neighbors–both children and adults.

MC was working with his dad in their construction business. His typical work uniform consisted of a t-shirt and cotton shorts with an elastic waist–the kind you would wear to the gym or to play basketball in, the kind that if you were to put a wallet in the side pocket it would pull the shorts down. So MC never carried a wallet. This particular story takes place on the holiest of all holy days when you are newly married and poor–Pay Day. MC was paid in cash that Friday, all $1200 worth. His dad drove him home as they had a bunch of wood to unload in our back yard. When they got to our house, his dad pulled over to the side of the road and MC hopped out of the truck so he could open the back gate to allow the truck through. They got the wood unloaded and then MC came in for dinner. At dinner MC mentions the fact that he got paid. “Um, that’s great honey, but…where is the money?”

It seems that when MC hopped out of the van, the cash he was holding in his lap dropped on the ground. We scoured the area but couldn’t see any sign of the cash. Obviously someone had come along and picked it up, but who? It was then that MC remembered the elementary school kids that were walking home at the same time he pulled up. He remembered because he thought it probably scared them that a truck pulled over right in front of them and then a dirty looking man jumped out. Well, if it was kids from the elementary school, then they most likely lived in the housing complex across the street. It was late by the time we put all this together so we decided that we would canvas the neighborhood the next day after MC got home from work.

That Saturday we hit every single door in the neighborhood and talked to everyone. Parents questioned their kids but no one remembered seeing anything. We were on our last row of houses and I was close to tears (again) at this point, but we weren’t ready to give up. As we went through our sob story yet again we could tell something was different. This particular mom was looking a little nervous. She knew something. We begged her to tell us. We didn’t want to get anyone in trouble. Seriously, what kid wouldn’t pick up all that cash if they saw it lying on the ground? And we were offering a reward, no questions asked, if we could just get the money back. That money was the difference in paying our mortgage or not, eating or starving, paying our bills or letting them go to collection. Finally, with a cautious glance around the neighborhood and a promise from us that we wouldn’t say where the information came from, the story came out.

The group of kids who were walking home at the time did indeed see the cash and took it. They didn’t think to ask if it belonged to the man whose house it was in front of, they just split it up and took it home. The reason this Tipster knew about it was because when the other neighborhood kids heard about the money, they were upset that they didn’t get any. This included her son who came home crying about it. I wish I could say this was a case of kids stashing away some found money and the parents were none the wiser. I wish I could say that because then it would only reflect on the children who can be more easily forgiven for being tempted by that kind of money and not thinking of how taking it would impact someone else’s life. Unfortunately, that wasn’t the case. It had become a matter of contention among the neighborhood because those kids showed up at football practice that Saturday morning wearing brand new Cowboys jerseys and sporting new tennis shoes. These were elementary school kids. The only way for them to get to the store would be for someone to drive them there. And no parent would miss the fact that their kid was wearing very expensive new clothes. That meant their parents took them on shopping sprees within hours of bringing home money that obviously didn’t belong to them.

We were absolutely devastated. We had knocked on every door that day. That meant, somewhere along the line, grown ups looked us right in the eye while we told how that money was all we had in the world and they lied to us, flat out denied knowing a thing. While it was awful to have lost that money and not had any idea how we were going to pay our bills, the worst part was knowing that there were grown ups out there that condoned not only taking something that didn’t belong to them but also lying about it. And they were teaching this lesson TO.THEIR.CHILDREN. It just made me sick. 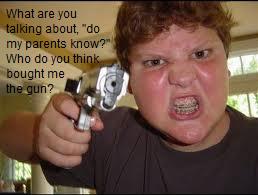 Since the Tipster refused to name names–not wanting to get involved, you know–there was nothing the police could do. We were simply out of luck. Our family came through for us as much as they could. Bills were late, and some not paid, but we had food and gas. That is easy to get over. To this day, though, I am just heartbroken that there are parents instilling those types of lessons onto their kids. People wonder what’s wrong with kids these days? Start with their parents. Kids are only as strong as the foundation they are built on.