0 shares
It happened. My son was kissed by a girl. My kids are getting older so I knew it was bound to happen, I was just hoping for later rather than sooner. And I definitely didn’t expect it to happen to Bubba first. That’s right–Bubba had his first kiss.

He gets to stay after school to help in the library a couple of days a week. I was picking him up from library duty and as he was getting buckled he announced that he got “liked” at school. “Not the normal kind of like,” he explained, “but the kind of like that leads to public displays of affection.” I thought, “How cute. Someone has a crush on Bubba”, but it turns out it went a little further than that. According to my son, there was a little blonde girl with glasses also working as a library helper. She asked Bubba to help her shelve some books and when he did she gave him a hug and then kissed him…several times…on the MOUTH! That little hussy! I see how she “shelves books”. I can’t really fault her choice in boys but really? In the library? In elementary school? I think those kind of moves are supposed to be saved for much, MUCH later in life. 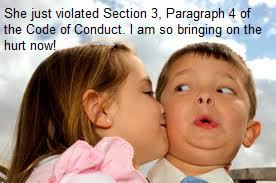 Before I could deliver the Bad Mama beat down to the girl with the loose lips, Bubba went on to tell me that he was NOT happy about being kissed. Well, duh! The kid is anti-girl and even more anti-romance. He said he tried not to be rude, though, and waited until Hussy (he didn’t actually know her name so I’m guessing) turned away before wiping off the kisses, and then he told the library assistant what happened. Because if there’s one thing Bubba knows, it’s the rules, and PDA is NOT allowed at school. So Hussy got a little talking to. It was explained to her that PDA is not appropriate and, in addition, Bubba does not welcome it. Apparently she got upset at being tattled on and told Bubba, “Well, thanks for calling me ugly!” He, of course, can’t make any sense out of that one since he didn’t call her anything, much less ugly.

Although it seems somehow appropriate that Bubba’s first kiss was quickly followed by his first scorned female.