0 shares
There are very few times in my life when I have felt like my life was in danger. As a rule I try to avoid anything that is dangerous, questionable or even just taxing, so to fear for my very life is a rare experience. And yet, wouldn’t you know, I have a story to share about that very thing.

In the years B.C. (Before Children), MC and I lived here in TX. While he would go off to his construction work every day, I would drive the 45 minutes to an hour (depending on traffic) to my job as an assistant manager at a mall in Dallas. I liked my job and all was well…until my car broke down. (I know, big surprise, right?) We were a one car family at this point so, as you can imagine, this created some problems. MC rode to work and back every day with his dad. They were able to drive me to work for a couple of days and then I had to rely on my brother-in-law to pick me up and take me home or work around MC’s schedule and wait for him. This only lasted for a week when we decided enough was enough and we needed another car NOW. Turns out my sister-in-law had a car that she wasn’t currently driving; she was willing to loan it to me until our car was able to be fixed. Great! Problem solved!

Only that solution provided another problem. Her car was a stick shift and I’d only ever driven automatics. To make it even better, there wasn’t anyone available to drive me to work that Monday which meant I had exactly 2 days to master driving a stick. In my opinion, driving an automatic is much easier and it had taken me 2 1/2 years to get my license to drive that! How was I going to learn to drive an standard in 2 days? Enter our dear friend, Necessity. 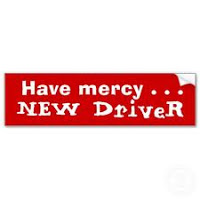 On Saturday, MC drove us to an empty lot in front of the high school stadium and proceeded to explain to me the mechanics of driving a stick–how to change gears, when to change gears, when to push down and let up on the clutch. In theory I got it. I could’ve explained to anyone exactly what went into driving a stick shift, but then came time for me to get behind the wheel. We took it slow, starting with me simply learning how to start the car and get it into first. Then we moved up to giving it a little gas so I could let up on the clutch. Eventually we kicked it up a notch and started doing really crazy things like turning, increasing speed and shifting gears. I would love to be able to tell you that I picked up on it quick, that I was a natural at coordinating the gas, clutch, gear shift and steering wheel all at the same time…but you all know that would be a big fat lie.

If you had been a fly on the stadium wall that weekend, here’s what you would have seen: a little red car jerking across the parking lot, stalling out every 30 seconds and suffering through some serious grinding of the gears, while the driver cried and yelled and railed at the man in the passenger seat, who was probably praying for patience as well as a magic genie who would release him from the chore of teaching his technically challenged wife to operate a motor vehicle. I try to do my best to block out memories that will paint me in an unflattering light (which is probably why I can’t seem to remember anything) but I’m fairly certain there were words screamed out to the effect of, “I will NEVER learn how to do this!” and “Curse the man who invented standards!” and “This just isn’t FAIR!” (always a good fallback). MC was patient as always and we kept at it for hours. By the time Sunday evening rolled around, I was marginally better. Good thing, too, because in just a few short hours I would be testing my new skills out on the highways of Dallas.

Driving in Dallas is a unique experience. The posted speed limit on the freeway is 65mph, but the traffic frequently moves at 80mph. When there are rush hour back ups, what tends to happen is drivers get on the freeway and hit 80 as soon as they can but then have to slam on their brakes when they come upon congestion. So you have 2 speeds during rush hour: 1)Take Your Life In Your Hands and 2)Hit The Brakes And Pray For A Miracle. Good times. Let’s throw into this mix a very nervous driver who is not at all confident in her newly acquired driving skills. Now we’ve got ourselves a party!

If I could’ve just driven to work, shaky hands and churning gut ever present, I would’ve been fine. But I’m not that lucky. Driving at those speeds, I had to shift into 5th gear. No problem. But then I would have to slow down for traffic. Time to down shift. Only every time I tried to shift from 5th to 4th, I would skip a few gears and drop it into 2nd. They are right next to each other and the shift between the two was so slight that I kept shifting to the wrong gear. If you aren’t familiar with driving a standard, allow me to explain to you what happens when you do that. Doing 80mph and then shifting to 2nd (which is where you’d be at if you were driving maybe 20mph) is like putting the brakes on a roller coaster heading downhill. We’re talking instant whiplash. The only thing that saved me from a steering wheel-induced concussion was the seat belt that dug into my chest and kept me glued to the seat. What also happens is the engine stalls out, so you go from doing 80 and moving with all the other traffic to being dead in the water. And that is a scary place to be.

More times than I care to remember I found myself suddenly stopped in the middle of the freeway with cars zooming closer in my rear view mirror. Drivers honked and flashed me some creative hand gestures while swerving to avoid plowing into me. Trying to talk through all the steps I learned over the weekend while on the freeway would’ve been bad enough, but throw in the risk to life and limb and the fear of being the subject of tonight’s headline news and I was a wreck. Everything seemed to take longer. Gears moved around on me, the clutch wouldn’t cooperate, and I swear someone magnified that grinding noise the car made when I was slipping through gears until every car on the freeway could hear the evidence that I was a new driver.

By the time I finally made it to work (in one piece, thank you, God), I was a nervous wreck. And 15 minutes late. I must’ve looked as bad as I felt because as soon as I walked in, my co-workers came rushing over asking, “Are you okay?” And, as any girl can tell you, those are the magic words that will unleash the dam. I started bawling (whereas up to this point I was only mildly crying), my stomach rebelling and my hands shaking like they were forming their own tap line. But I had survived. I couldn’t believe I had made it through that harrowing gauntlet alive. And I couldn’t believe I was going to have to do it all over again.

Necessity forced me to master driving a standard and soon I was confidently flying down the freeway with all the other daredevil drivers. I still avoid driving a stick shift whenever I can help it but it’s nice to know that the skill is there if I need it. I just always hope I won’t need it.