0 shares
The debates, the ads, the endless bickering are finally over. The billboards and lawn signs have been taken down, the polling places returned to their previous usage, and life is returning to normal. For some, it was a time of celebration as their candidate won. For others, it was a bitter pill to swallow as their candidate had to concede defeat. For myself, it was just disappointing knowing that the person I thought should win wasn’t even in the running. In fact, he wasn’t even on the ballot. And how could he be?
He’s only 12.
You’ve heard me say that due to his alternately-wired brain, Bubba
is a pretty sharp kid. In addition to his book smarts, he has a very unique way
of looking at things and approaching difficulties. He is funny, smart, stubborn
and sweet. And I think he may just run this country one day.

Think about this for a minute. Who better to run our country than
a high functioning Autistic kid? With 1 in 88 kids having a diagnosis on the
spectrum, there is no one better suited to be a “man of the people”
than someone with Autism.
Bubba is great at math and reads higher level math textbooks…for
fun. He likes numbers and logic–there is no way he could live with an
unbalanced budget. He would pull out all those budget sheets and get it done
before it was time for a video game break.
He is also a stickler for the rules. He doesn’t care how old you
are or what your ability is–you have to follow the rules like everyone else.
He doesn’t catch subtle social cues or inferences, and peer pressure is
meaningless to him. He would never cave to lobbyists or special interest
groups. And if the Constitution is a set of “rules” that our country
is based on, Bubba would never do anything contrary to them.
Still not sure? Listen to this. I got an email recently from one
of Bubba’s teachers. It seems that during lunch, one of the other students
wanted one of the Pringle chips that Bubba had in his lunch from home. Bubba
offered to let him have one…for $11. The student agreed to the terms but the
teacher intervened and had to sit Bubba down and discuss why $11 for 1 chip was
not a fair deal. She suggested he trade a chip for help with his writing work
or something similar, but as Bubba pointed out, it’s not a fair deal if you’re
not getting something you want. Really, he didn’t see what the problem was.
He’d even worked out a payment plan so the money could be paid out over the
rest of the school year. 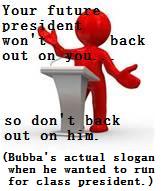 Don’t you see? This kid has got it all down in a way that seasoned
politicians are still struggling to understand. He gets the idea of supply and
demand. He understands the benefit of payment options to get something you
want. And he has a firm understanding of fair trade–it’s a fair trade if all are
happy with the terms. Find me one candidate who has all this AND an endless
supply of knock knock jokes.
Is there any question on who the right choice is?

(*Editor’s Note: Completely out of the blue, Howdy said the other day, “I think Bubba would make a good politician because he’s always trying to find the loopholes.” See? I’m not the only one who thinks this kid is on the fast track to the White House.)
Previous Post: « Adventures In Babysitting
Next Post: The Christmas Exchange »