0 shares
When I was growing up there was one rule for the summer–find something to do or mom would find something for you. And you can bet she wouldn’t find something fun. No, mom would find chores for us to do around the house–vacuuming, dishes, or even (*shudder*) mating socks. So once we were up and dressed, we were careful to stay out of mom’s sight until dinner. When you are too young for a driver’s license but old enough to ride bikes, what do you do? That’s right–you explore the neighborhood. 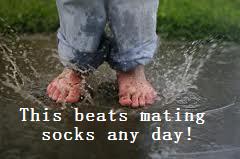 Of course, we grew up in a different time. My sisters and I would walk a couple of miles up to the convenience store and back just so we could load up on candy. We’d go hang out at the park all day just because we could. My younger sister and I were fond of cutting through all the woods around our house and following creeks and trails just to find out where they led. We were our very own version of Lewis and Clark.

I remember one such adventure that we had when I was in 4th or 5th grade (this would put Sissy in the 2nd or 3rd grade). The two of us were out exploring with my friend, C. In and out of woods, up and down trees, across creeks and ditches–no where was off limits to us. And so it was that we ended up at a fenced-off field right next to my neighbor’s house. When we were young, we never considered the possibility that a fence might have been put up to keep something IN, as opposed to just trying to keep kids out. But a fence is no deterrent for experienced adventurers. It’s merely a speed bump to go over (or under) and then continue on our way.

This particular fence was of the barbed wire variety. That just meant we had to be a little more careful as we navigated around it, which we absolutely did, and then we trekked off to worlds unknown. Walking through a field or forest that is unknown carries with it the feeling of something illicit and possibly dangerous. Would we get in trouble if we were caught? Would we discover some kind of secret hideaway? Would we stumble upon a hidden treasure that had been stowed away and then forgotten? It was with this excitement thrumming through our veins that we plowed through grasses that were taller than our heads, anxious for what might lie ahead.

We had only been walking for a few minutes when we heard a peculiar sound. It was a sort of snuffling/snort sound, and it was coming from somewhere ahead of us in the high grass. I was leading the expedition and I turned around to my co-explorers. They all confirmed that they had heard it as well, but we couldn’t agree on whether or not to continue. There wasn’t anything ahead of us that we could see. Maybe whatever was sharing the field with us couldn’t see us either and would therefore leave us be. 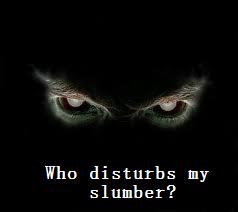 Unfortunately, that wasn’t to be the case. Suddenly the quiet of the field was broken up by the sounds of hoof beats…coming at us. We didn’t stick around to see what we had disturbed; we turned and ran full out for the fence line. Over the sounds of our yelling and screaming, I could hear twigs snapping, the ground thundering and something panting heavily as it eyed its next meal. Whatever was behind us was huge, it was mad, and it was bearing down on us like a freight train. The race back to the fence seemed to take forever while visions of being trampled under the thing’s massive hooves and then gobbled up like an afternoon snack flashed through my head.

Finally, the fence was in sight. C shimmied under the barbed wire, followed closely by Sissy. I was up next and as I was diving under, I swear I felt the creature’s hot breath on the back of my neck. My heart was in my throat and I couldn’t breathe. Faster, faster, faster! Just as I was thinking I was going to make it, my shirt got caught on the barbed wire. “NOOO! I don’t want to be eaten! I’m too young to die! Pull it! Rip it! Do whatever you have to do, but get ME FREE!!” With an audible tear, my shirt came free and I tumbled out from under the wire, relieved beyond belief to be on the safe side of the fence at last. We had made it.

As the 3 of us stood there on the side of the road, trying to control our racing hearts and wishing we could remember how to breathe, we finally caught sight of the creature as it cleared through the grass and approached the fence. Despite my conviction that I was being chased by a 7 foot tall, fire-breathing creature of nightmares, it turned out to be merely…a cow.  And a relatively young one at that. She ambled over and got an eyeful of us. Then, with a very put-upon sounding snort, she shook her head and then disappeared back into the field.

I would like to say that this taught us a lesson in being more careful where we roamed, but I’m a terrible liar. When I look back at all the places we ended up, the jams we had to get ourselves out of, the completely idiotic things we did at the time in the name of fun, I’m amazed that we survived our childhood with all of our bones in tact. And, as a mom, all I can say is sometimes it’s better to NOT know what your kids are up to.