0 shares
MC and I are going to camp on Sunday and we are excited. It’s a camp for Middle School and High School kids at church so we got Howdy and Bubba signed up. We were asked to be teachers/chaperones and we agreed as long as Sassy could go with us. Now we have our family vacation for the year planned and we didn’t even have to take care of transportation, housing, or food! Nice! 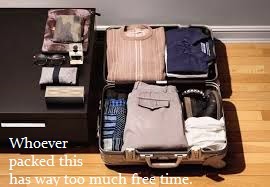 We had a last minute meeting last night with the youth ministers, interns, and camp crew to go over all the particulars. Very productive. As we were winding down, the high school youth minister–“A”– said he needed to get home so he can pack. My first thought was, “We’re heading off to camp soon. Where could he possibly be going?” With that thought tumbling around in my (obviously vacant) brain, the middle school youth minister–“J”–jokingly says, “I’ll pack on Saturday!” And that’s when I put 2 and 2 together and realized that A was going to pack for camp…that was still 4 days away. When I look back on my life, I can vaguely remember bits and pieces of a time when I would pack ahead of time, even a week or two before the event.

But then I had kids.

And it’s not that having kids running around makes it too difficult to accomplish the packing, it’s that somewhere in the process of incubating and birthing the little minions, my internal schedule broke. Whereas before, MC and I always strived to be punctual, if not early, now I’m happy if we make it to an event before it’s actually over. And packing for said event? That’s just a whole other challenge right there.

Packing for 5 for a week long camp in the mountains of New Mexico will look something like this:

*Start gathering clothes Friday night after work, after dinner, because that’s the first moment that I’ve had to 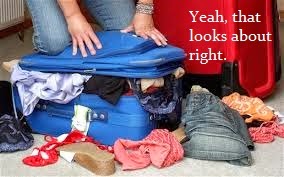 sit down.
*Realize that I cannot make a single outfit out of any of the clean clothes we have left. Start doing laundry. This week I get the added bonus of a broken dryer, so after everything is washed I will pile it all into the Beast and spend 2 hours at the laundromat waiting for all of it to dry.
*By the time I get back, it’s 2am and I’m dead on my feet. I set my alarm and vow to get up early to finish packing.
*After hitting the snooze button 27 times the next morning, I drag myself out of bed to discover that the kids made themselves breakfast and found time to watch 4 hours of brain-deteriorating cartoons but couldn’t be bothered to let the dog out to pee.
*Take the dog out.
*Dig through the suitcases and try to remember which ones work, which ones are big enough, and which ones I should have thrown away after the last trip. Get the right suitcases and pass them off to the corresponding campers.
*Stop for lunch/kid herding/dog herding/(insert time-sucking activity here).
*Put together all the outfits, the “get dirty” outfits, and the extra layers needed for myself and MC, since he most likely had to work extra hours to get the latest work project done before he was unreachable for a week.
*Yell at the kids to stop playing around and start packing.
*Gather all the toiletries.
*Shove, fold, rearrange and generally do whatever it takes to get the darn suitcases to close.
*Stop for dinner…and to repack since I realized I forgot to include my pajamas/jacket/underwear/(insert needed article of clothing here). 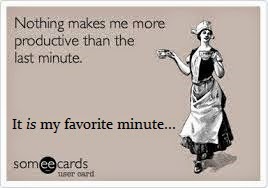 *Look over the kids’ suitcases and realize they still don’t know how to pack. Fix the kids’ packing jobs.
*Set the suitcases, pillows, jackets, sleeping bags, and shoes by the front door so they aren’t forgotten.
*Write a list of everything that has to be grabbed in the morning. Make peace with the fact that one or more toothbrushes and/or deodorant will be left behind.
*Crawl into bed late (again).
*Wake up late (again). This kicks off the frantic, chaos filled, running around like crazy routine that leads to the forgotten toothbrush and/or deodorant. Make it to the buses with zero time to spare.

In comparison, doesn’t packing ahead of time just seem…dull?