0 shares
You will never guess where I was today. OK, let me amend that–if you aren’t one of my Facebook friends, you’ll never guess where I was today. I was at…a waterpark. Again. Didn’t I just post how much I dread going to waterparks? Why yes, yes I did. But Bubba and Sassy are heading off to camp next week and for a single, solitary, heat induced moment, I thought it would be fun to have a waterpark send-off. I’m telling you, heat is a dangerous thing. 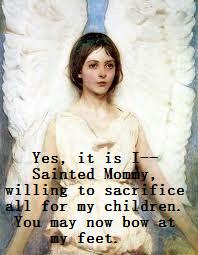 I got smart this time, though. I invited my 2 nephews along. I figured, if Sassy had someone to play in the water with her, she wouldn’t be asking me. And it worked! (Patting myself on the back.) We got there about 15 minutes after they opened and there was already a line. But it wasn’t as hot as it was earlier in the week so the wait wasn’t so bad. And I came prepared with a cooler stocked with ice waters, apple slices and granola bars–we were set.  Once inside, I was excited to find an unclaimed lounge chair and we promptly dumped all our stuff on it, lathered up with sunblock, and then they were off.

As I sat and tried to get all settled in for the duration, I noticed the lady with the chair next to mine was…hovering. She was just standing there next to me, not saying anything, not doing anything, just standing. I tried to ignore her, I really did. Until I had to get up and move the chair in front of me so I could keep an eye on the younger ones who were in the kiddie pool. I turned back to see her watching me and I said, “I need to be able to see my kids,” and I smiled. She didn’t smile back; she grabbed the headrest of my chair, and said, “Mine.” Really? You’re going there? I gave a wave of my hand to indicate that, clearly, I already had all my stuff dumped on the chair, thereby staking the claim that the chair was, in fact, mine. If you don’t leave something on the chair, it is open for anyone. That’s the rule and everyone knows that. Was she there first? Yes. Had she observed proper waterpark chair claiming procedure? No. The chair was mine by rights. She didn’t seem to know about the rule or even care if there was a rule, she just tossed her beach towel over the headrest and continued to stare at me.

It was at this time that I had to assess the situation. I mean, clearly the chair was mine, but did I really want to get into a petty argument with a woman who didn’t seem to speak any English, other than that one word? I might have been tempted, but upon closer inspection, it was obvious that she could take me in a hand to hand battle. I’m not completely stupid and knew it wasn’t worth risking life, limb and a cute hairdo over a stupid chair so I decided to stroll around and see if there were any more open. Every single chair in the area was staked out with someone’s belongings (they obviously observed the time honored tradition of chair claimage). I finally located a chair all the way at the other end of the park and hefted it over to the kiddie area. I parked myself in the shade and then proceeded to transfer all our bags, shoes, clothing, and cooler to our new spot. 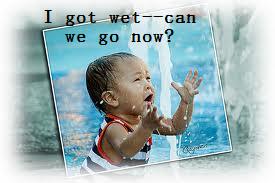 I resigned myself to spending the day at the waterpark, sacrificing a day spent writing or reading so my kids could get out and have fun. I took the time to pack snacks, invite friends and even put on my bathing suit. So when two of the boys came up to me after an hour and a half and wanted to go home, I wanted to scream, “Are you kidding me?! You ask every day if we can go to the waterpark and now you want to leave after an HOUR AND A HALF?” The answer was no. I told them we were going to stay for at least 3 hours–whether they liked it or not, of course. And then another kid came up, asking the same thing. Seriously? What is wrong with these kids? I know what’s wrong with them. These same 5 kids were spoiled the other day when I let them spend the day playing video games–something that never happens in my house. It went on like this the entire time we were there. Every 15 minutes a different kid would come up to me asking, “How much longer?” 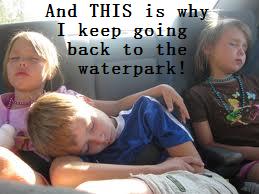 At the 2 1/2 hour mark, I finally gave in and said we could leave. However, it took another 30 minutes to get all 5 of the kids out of the pool, toweled off and into their clothes and shoes so by the time we were heading out the gates, we were able to say we had been there for 3 hours. Back at the house, only 1 kid actually got on the games. I think the heat sapped the energy right out of them.

I KNEW there was a reason I liked the waterpark.