0 shares
I am a serial killer. Of cars. It’s not that I set out to destroy cars, I just have a gift. I’m not sure if it would be negligent homicide? Death by proximity? Whatever it is, I’m tough on my cars and tend to run them into the ground. I’ve had so much car trouble, in fact, that I keep a tow truck driver on speed dial. When I call, he doesn’t answer with “Hello”, he answers with “Where are you this time?”. 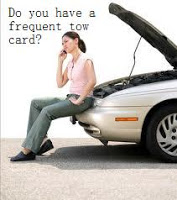 I once had a station wagon that I killed when I neglected to keep oil in it. I believe that is the only instance where an auto death can be directly tied to my lack of car upkeep. Usually I am presented with odd problems. For instance, I was driving my Blazer across an overpass 4 stories up when the front axle decided to break. That was a little scary. Especially when I couldn’t get it to go any further than the junction where 2 freeways merged. The sway bar in my previous mini van broke when I bottomed out in a pothole. Supposedly sway bars are next to impossible to break. (Like I said, it’s a gift.) I also had a car suddenly start smoking from the steering column while I was driving. Turns out some of the wiring was frying inside; it was quite interesting at the time. I’ve had more than my share of flat tires, a shredded fan belt, leaks in the radiators, a broken thermostat, a whole army of dead batteries, fatally wounded transmissions and even bad gas that caused my car to spontaneously shut off while driving. I’ve driven 2-doors, 4-doors, station wagons and mini vans, and just about every one of them has died a suspicious death.

So it really should be no surprise that Suzy is ailing. Suzy the grape, our beloved purple mini van, is starting to give out. The surprise is that this time it’s different. She’s like one of those fiesty old ladies you meet whose mind is sharp as a tack but her body is failing. Suzy’s engine is holding strong but her body is starting to give out. The passenger window won’t roll down. The sliding door locks stick and now one of them won’t open with the power lock button; it has to be opened manually. The driver’s side slider is getting tough to slide open and closed. The speakers are going out. Getting any FM channels is hit or miss. If I do get one to come in, it will turn off–and then back on–whenever it feels like it. There is a hidden leak in my cooling system so I don’t have A/C (as you may remember from last summer). My heater core has gone out so I can’t use my defrost or vents and it leaks inside when it rains. Oh, and my cup holder is broken.

These are unusual problems for me. How can Suzy run great but be such a mess on the inside? While I can live without the radio (as long as the CD player holds up), I dread getting into the van in the 90* heat with only one window down to cool everyone off. I’m considering shearing off the whole top and turning Suzy into a convertible. Who says a mini van can’t be topless?

When I lived close to my sister we used to rely on each other for everything. We balanced out each other’s weaknesses to the point that we used to joke that between the two of us we made one really great mom. I’m thinking that would be a great concept with all my cars. If I could just take all the cars I’ve owned and piece them together, I would have one smooth ride. Yes, it would probably come out looking like Dr. Frankenstein’s version of an automobile, but a girl will do what she has to for A/C!