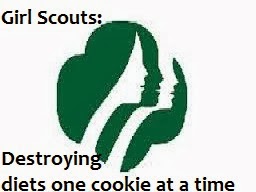 4:01pm on Saturday was a most glorious time as it found me loading up my last Girl Scout cookie booth sale…at least for a few weeks. As far as everyone else is concerned, cookie season is over. But what we don’t tell you, the unsuspecting public, is that if any troop still has cookies after our payment deadline, we can keep selling them until May 31st. That’s right, you just thought it was to safe to start prepping for bikini season. Think again.

This was only our 2nd year of selling cookies but something happened to me this year, something that sent me over the line from enthusiastic Troop Leader/Cookie Mom to pusher of Girl Scout crack. I went from being a mere distributor to being a dealer willing to do whatever it took to get philanthropic-minded customers hooked on what we were selling. It’s a slippery slope, but I’m here to give my testimony so that those among you who are destined for the cookie/popcorn/discount card/random fundraiser crap path can be alert and aware of the signs of impending doom.

This year, the GS Council changed the game on us. Instead of earning only .50 per box (that’s right, folks, those sweet little girls only get .50 a box) for our troop, we could earn .67 a box if we ordered about 90% of what we sold last year on our first order. While this sounds good, my particular troop was down to 7 girls after having 14 girls selling last year. My girls and parents had originally only wanted to sell around 1500 boxes (just over half of last year’s sales), but they decided they could try for more. And so I ordered 2500 boxes. For my first pickup.

While the girls are allowed to go door to door, the best way to sell lots of cookies is through booth sales. We had booth sales at grocery stores, hardware stores, a medical clinic, and a bed&bath store. We peddled 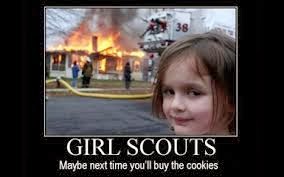 those cookies at home, at school, at work–sometimes even to random strangers we met in doctor’s offices. I’ve got my girls trained. They ask every customer who is leaving the store if they want to buy, and they don’t take “no” for an answer. No cash, you say? They will be quick to inform you that “we take credit!” Can’t eat cookies? It’s a good thing you can still donate to send cookies to our military. Already bought some? Why not buy another box to keep in your freezer for later?

These girls were cookie-selling machines.

And they worked their tails off. They stood outside in 33 degree weather to hawk those little nuggets of sugary goodness. They waved signs on the street corner, made up cookie themed cheers, and pasted on cutesy smiles when all they wanted to do was sit at home and eat cookies instead of selling them.

And where was I during all this? I was behind them, urging them to not miss that 90 year old lady heading

well. I was the one convincing them that they didn’t need a break because they’d only been standing for 2 hours. I was the one asking them how they expected to earn a trip if they weren’t selling more cookies to that lady with the 5 kids who was probably trying to save her money for diapers and formula. I was the one scheduling the girls in 3 hour shifts because 4 would mean they would get tired and cranky and be useless. I set up a sales booth and then I let my girls go to work while I watched the money come in.

I was a Thin Mint pimp.

Sure, I sometimes provided my girls with drinks, snacks, gloves or even the occasional break, but only because I needed them pushing product and if they keeled over from dehydration, they’d be worthless to me. Slap a long fur coat and a feathered fedora on me and they would have fit perfectly. The only thing that mattered is that we reached our goal of a trip to an overpriced waterpark where we can’t afford the food and we’ll only stay for one night because it’s so expensive. 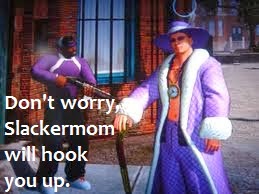 In fairness, I was at all the sales with my girls except for one. I stood out in the cold and waved signs, froze my fingers off, asked/rang up/sold and greeted with the best of them and spent plenty of time on my feet. I also took cookies with me wherever I went on the chance I could sell more. I brought in a couple of cases to work where the office is filled with young twenty-somethings who live on their own but don’t know how to cook and get all their meals from take out or delivery. I stored more than 200 cases of cookies in my livingroom since there was no other place for them. I kept track of thousands of dollars in deposits, made signs, connected with store managers, and stuck with our twice a month troop meetings in the meantime. I was a pimp, but I was a working pimp.

The girls have reached their goal for this year and set a long term goal for the next 2 years. The only trick? Selling all these cookies first. And that means more booth sales. Now…where did I put my purple fedora?