Four days after returning from our camping trip and all the laundry is done, most of the gear is put away and the smell of campfire has dissipated (wiping away a tear). It takes me longer to put everything away then it does to actually go on the camping trip to begin with, but it’s worth it. We had a few bumps along the way, but overall I’d chalk up our first family camping weekend in TX as a success.

I have to say, I’m quite surprised at how different camping in TX is from camping in WA. I know, I know, you all are rolling your eyes and saying, “DUH!” I mean, I knew it wasn’t going to be exactly the same, especially given that it was in the 90s here while we would flip over 70 degree weather in WA, but for the most part I figured camping was camping, right? 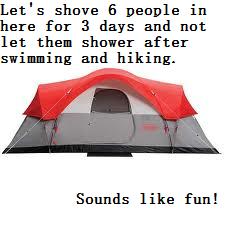 Because I am such a giver, I would like to share with you what I learned while camping.

Friday night started out as most of our trips do–waiting for MC to get off work, then rushing around pulling last minutes things together and finally getting to our destination with just enough time to pitch the tent before we lost all daylight. The first problem came as we were driving through the campground and MC suddenly put on the brakes. What? Did you hit something? Did a cute little fluffy bunny run onto the road? What is it? Very discreetly, so the kids won’t hear and freak out, MC turns to me and mouths the word “t-a-r-a-n-t-u-l-a”. WHAT?!?! Are you kidding me? There was a freakin’ tarantula on the road?? A spider big enough that you could see it from behind the wheel of your van? And you AVOIDED running it over??? Are you insane?? Forget the kids freaking out, I was a mess! I. Hate. Spiders. I actually started crying right there and told my dear, sweet husband that I wanted to go home. NOW. Monster spiders? I did not sign up for that, thank you very much. He checked with the registration office and they informed him that they rarely had any problems with tarantulas. Hello? The fact that one was spotted was a serious problem. But we were here, we’d already paid, and we had family coming to join us. I couldn’t really cancel at this point. (Boy, was I tempted though.) So instead I scanned every square inch of grass within my vicinity, wielding that flashlight like a sword, ready to scream and take flight at the first sign of movement.
Lesson learned? Ignorance is truly bliss. I never actually saw a tarantula the entire weekend but spent the whole time on edge waiting for one to show. If I hadn’t known they were there, I would’ve been fine. 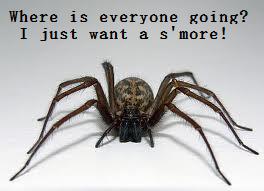 When you camp in WA, any site with a lot of trees is a good place to be because it means shelter if it starts to rain. I was quite pleased that we had a site with trees this weekend, it would mean shade during the hot day. What I didn’t know was that, in addition to shade, trees offer a great sanctuary for all manner of bugs but mainly–you got it–spiders. Fortunately, no other tarantulas were spotted. In fact, I don’t think we saw any that were bigger than a quarter. But what they might have lacked in size they made up for in quantity. They were EVERYWHERE. If we sat too long in one spot, we would have to break through web strings when we stood. Never having seen the spiders at work, they nevertheless would start using us as supports for their webs. We were constantly flicking them off our chairs, legs and shoulders. We had to beware when entering our tent so they didn’t follow us inside.
Lesson learned? When choosing a camping site in TX, pick the one WITHOUT any trees.

On Saturday, we took the kids swimming at Lake Texoma. They had a blast splashing around in the water and building sand castles. We got to do some exploring, too, but for the most part we just cooled off in the water. Let me rephrase that, the KIDS cooled off in the lake while MC and I relaxed on the beach. I brought out my ever present book and stretched out on a towel while MC snoozed on the inner tubes. Out there under the full sun I had sweat literally running off of me and the sand was full of ants that felt it was necessary to use me as a jungle gym, but I got to read while keeping an eye on the minions.
Lesson learned? I will put up with a LOT to get to read while the kids are occupied. 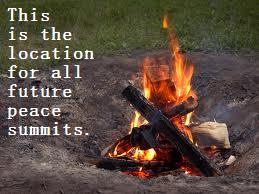 Bubba did tons some grumbling about not having any electronic games and he wasn’t too fond of our hike…or the bugs…or the outdoors in general…BUT once we had a campfire going, his attitude changed. Give that kid some paper plates or sticks he can throw into the fire and he is set. My little pyro. I think the campfire is our favorite part. Really it was a little too hot, but we still started a fire to cook lunchtime hot dogs and then again in the evening for light as well as roasting marshmallows and making s’mores. You get everyone around that campfire and that’s when we all relax. Everyone is hypnotized just watching the flames. And we do have a tendency to break out into song around the fire. Imagine that.
Lesson learned? A campfire can soothe many of life’s grievances. I’m thinking we should gather all the world’s leaders around a big bonfire and then, once their legs are all toasty and their eyes have glazed over, we have them sign a peace treaty. I bet they’d be much more agreeable that way.

As we were packing up on Sunday afternoon, I had to move MC’s van to make some room for my SIL’s truck. It was really hard for me to see out the back due to all our stowed gear and I couldn’t quite see what I needed to out the side mirrors so I wasn’t aware there was a tree behind me until I hit it. Hard. I got out to inspect the damage and was happy to see only minor scratching on the rubber covering the bumper. It was only when we got back home that we discovered the bumper was bent just enough that the back doors would no longer open. Yeesh. Figures it was me. But MC is not without incident. On the freeway heading home, he hit a bird. I saw it coming and thought for sure we would miss it, but no. I closed my eyes just before it hit the antennae and then the corner of the windshield with a really loud, really disturbing thunk. Nothing was left behind on the van, but I don’t think Tweety made it.
Lesson learned? There is nowhere we can go and be safe from our unique type of luck.

(*Editor’s note: I may never come back and visit this page again due to the spider pic. Blech!*)