This week’s Flashback Friday has been rescheduled so that I can get caught up on the happenings of the last week. Seven days after the slumber party to celebrate Sassy’s 9th birthday I am still recovering. I spent about 4 days sick in bed after the event. It started out as swollen tonsils, worked its way up to my head and has now settled in my chest. This nasty virus has systematically hammered its way through my body, making sure I will remember the lesson learned by agreeing to host 5 girls for a sleepover. I’ve never been a drinking girl but I liken it to the world’s longest hangover. With each piercing ache of my head, I am forced to ask myself, “What was I thinking?”

In my defense, I really truly thought it would be different than the last sleepover. I was prepared with lots of planned activities. I figured if I had it all structured, the girls wouldn’t have the time or opportunity to get in trouble. I should have taken it as a hint when Sassy was told she could invite 4 girls but actually invited 5 that things were bound to go awry. The following is a timeline of actual events that occured that evening. I’m still sifting through the rubble and trying to figure out where it went wrong.

2:45pm T minus 10 minutes. I’m sitting in front of the school waiting to pick up Bubba, Sassy and the 5 friends we are taking home for her slumber party. I spent the last 2 1/2 hours scrambling around to make sure everything was ready at the house and now I’m sitting in Suzy, shoring up my nerves with Hostess Snoballs and Dr. Pepper.

3:19pm 5 of the 6 girls are with me in the van while we wait for Bubba to finish his library duty. To pass the time, they sing “Rolling in the Deep” and then “Last Friday Night”. The karaoke session eventually dissolves into a debate over which boys they would like to sing to. Oy.

5:14pm Caught a break–girl #6 isn’t going to make it. Game’s over and while most of the girls are willing to play another round, Sassy vetoes it. While I am scrambling for another game, they all throw on their shoes and go outside which is proceeded by a litany of instructions. “Don’t play in the front yard–it’s too dangerous. Stay off the swing set–it’s rusted and not safe. No, you can’t go on the trampoline because I haven’t fixed the enclosure yet. No one ever means to fall off but it happens. I don’t care how careful you’ll be, until everyone’s parents have signed a “Will Not Sue” waiver, no one is going on it.”

5:28pm The girls decide it’s too cold and boring outside and trek back in. I sit them all down at the table with glue and glitter and stickers to work on a craft project. This is met with enthusiasm. I stand at the ready to mop up the puddles of glitter glue that find their way to the tabletop.

5:51pm I feed the girls and my boys. Scarf down a slice myself knowing I may not get a break for awhile.

6:24pm I would have liked to wait longer to let their pizza digest but the natives were getting restless and I bring out the cupcakes and ice cream. Sassy decided she wanted everyone to decorate their own cupcakes instead of having a cake. This means that the girls had a little bit of cupcake to go with their sprinkles. 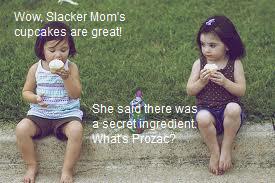 6:58pm The sound of Sassy opening her presents is accompanied by repeated strains of “Open my present next” and “No, open mine“. Sassy is given not one, but two beading/jewelry kits, one of which will be scattered all over the livingroom before the party is over, which makes my vacuum so happy.

7:13pm The girls sit down in front on “Judy Moody and the Not Bummer Summer.” With the exception of “M”, who knows the movie by heart and insists on talking along with the characters, it is blessedly quiet for a few minutes.

7:25pm I sneak into Sassy’s room to clean up and make sure there is room for all the sleeping bags. I pick up a sheet of construction paper only to discover that it landed facedown on the glitter glue that hadn’t yet dried. I scrub the carpet but some of it managed to dry, leaving a large glittery patch about 6 inches from the nail polish stain.

8:11pm After plying the girls with bowls of popcorn and M&M’s, I sneak off to my room to watch a movie with MC. We are able to watch it in spurts throughout the night.

8:44pm The movie is over. It was nice while it lasted. The girls bounce around between having a dance party in Sassy’s room, playing Just Dance 2 on the Wii in the livingroom, and harassing the boys.

10:15pm The girls pull out all the craft supplies again and start making their own scrapbooks. Somehow this leads to them using the stamps and ink to tattoo their arms. I just shake my head and ask them to please not tattoo their faces.

11:38pm Drama. “T” is crying. She’s been a little out of sorts all evening. I think it has to do with having to share her friends and not getting enough attention. I’m at the computer when she comes out of the bedroom and pouts on the couch. When the other girls come out and try to talk to her, I try to be as inconspicuous as possible and pray they don’t bring the drama to me.

12:30am Thirty minutes after lights out, there is Drama again. That’s right, with a capital D. “T” is crying because “I” is being mean to her. She just wants to go home. “I” is crying as well (I’m assuming because she got tattled on). This causes Sassy to cry and when I come in to try to intervene, she has worked herself up so much she’s doing that hitching/choking sob where she can’t even breathe. After throwing some guilt on the fire (“Thank you girls for making my daughter cry at her own party.”), I proceed to calm everyone down. No one goes home.

2:06am Sassy, “K” and “I” are still up. When I go in to scold them, I discover Sassy and “K” got bored and wrote all over their faces with marker. For a moment, I am at a loss for words. The only thing I can think to say is, “At least you used the dry erase markers.”

Eventually they go to sleep. I set my alarm so that I can (hopefully) get up before the girls and drag myself to bed at 2:30am. Stay tuned for Part 2…