Today’s blog is sponsored by my frequent partner in crime, my younger sister–who I am fond of calling Sissy. We have been through many adventures together–road trips, raising babies, car accidents, etc.–and if there’s one thing we can count on, it’s that things are never dull. Even the mundane can be made exciting when the two of us get together.

Example? One time we were hired by an associate of our mother’s to come and pack up his house for him. No problem. We were both stay-at-home moms at the time and welcomed any chance to make a little extra cash. So we go to his house where he lines everything out for us…and then leaves. Honestly, I prefer to work this way–much better than the homeowner breathing down your neck. I like to think he left us alone because he had full confidence in our ability to do the job but in reality, I think he just didn’t want to be around when we discovered his filed-by-topic porn collection. Not kidding. Unbeknownst to my mom, Dude was a total freak! But that’s a story for a different time.

So the packing went quickly and with no supervisor, we started to get a little bored. What to do to fill the time? Hello? Poke around and explore, of course. And what to our wondering eyes should appear but…a laundry chute! There’s just something special about a laundry chute. It takes me back to the days when we would go to my Grandma’s house and play with hers. It was just a hole in the bathroom that dropped down to the basement but oh, the fun we could have with it. We could drop secret messages down to the person waiting in the basement, or we could pile up all the dirty clothes and then drop each other down to the basement. Either way it was hours of (videogame free) fun. It makes me sad to report that laundry chutes are becoming extinct.

When Sissy and I discovered that square hole in the bathroom cupboard we were giddy with excitement. Then came the debate–who was going down it first? Mind you, it was just a hole in the floor that led straight down to the laundry room, so our debate wasn’t “I wanna go first!” but “No, YOU go first!” I don’t know how it happened, maybe because I happen to be the braver one or maybe because Sissy has slightly few more brain cells than I do, but I was chosen to try it out first. Yay me. 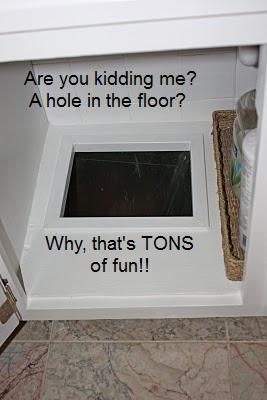 So, feet first, down I go. I lower myself through the opening thinking it’s not so bad. I get the lower half of my body through so I’m resting on my elbows in this hole in the floor when I realize I didn’t think through the mechanics of this all that well because now I am stuck. I can’t maneuver around enough to get my elbows in to lower my arms…and I don’t have enough upper body strength to pull myself back up. I am literally stuck, hanging half in and half out of a laundry chute in the home of a porn freak who could come home any minute. And keep in mind that, like all good siblings, seeing the other one in distress is freakin’ hilarious so Sissy is laughing it up the whole time which only makes me laugh which, in turn, makes it that much more difficult to keep hanging on, even though I can do nothing else.

After much teasing and debating, Sissy got the brilliant idea of going down to the laundry room and trying to “catch” me. Yeah, that didn’t work. I couldn’t get myself down the hole farther for her to help me. She could grab my feet but, even if I could’ve let go, she wouldn’t have been able to to take my weight. After what felt like forever of Sissy running back and forth between the downstairs laundry room and the upstairs bathroom and us tossing out ideas and then just as quickly nixing them, we finally came up with the solution of stacking things up so I had something to stand on. This wasn’t exactly the safest solution either considering that one chair wasn’t near high enough and we had to get creative with boxes and the limited furniture that was around but we were running on borrowed time and it was all we had. By then my muscles were aching–the ones used to hold me up and the ones from laughing. Once I had something to take my weight, I was able to move my arms around to work them through the hole and then climb down our makeshift ladder. I made it in one piece. Dude didn’t come home until much later, which was good because we had no idea how we were going to explain that one (not to mention we feared it may have been one of his secret fantasies). I’m just grateful there weren’t camera phones back then.