0 shares
Sassy doesn’t have her own phone. According to her, she is the only person her age who doesn’t have one, but we still aren’t giving in. However, she does have friends she would like to talk to sometimes and so I’ve let her give out my number before so they can call and text on my phone. Apparently I should have been more specific as to how and to whom she gives my number to.

Yesterday, I received a “hey” text from a number I didn’t recognize. Those are generally from Sassy’s friends as they only communicate in one word phrases:
“Hi”
“S’up”
“Nuthin'”
“K”
“You?”
“Same”
“Cool”
But since I didn’t know who it was, I didn’t respond. At least, not until I’d received 12 “hey”s. Then I got a little annoyed. So I answered…

I saved the number in my phone as “Markus”, but according to Sassy, she doesn’t know a Markus. She does know a Shemarcus but she says she’s never given him our number–and they aren’t currently friends. She also claims to not have a boyfriend but that could be more from self-preservation and not wanting to see mom flip her lid than the actual truth. Either way, I do not handle the idea of my not-yet-teenage daughter having a boyfriend so well. The conversation continued… 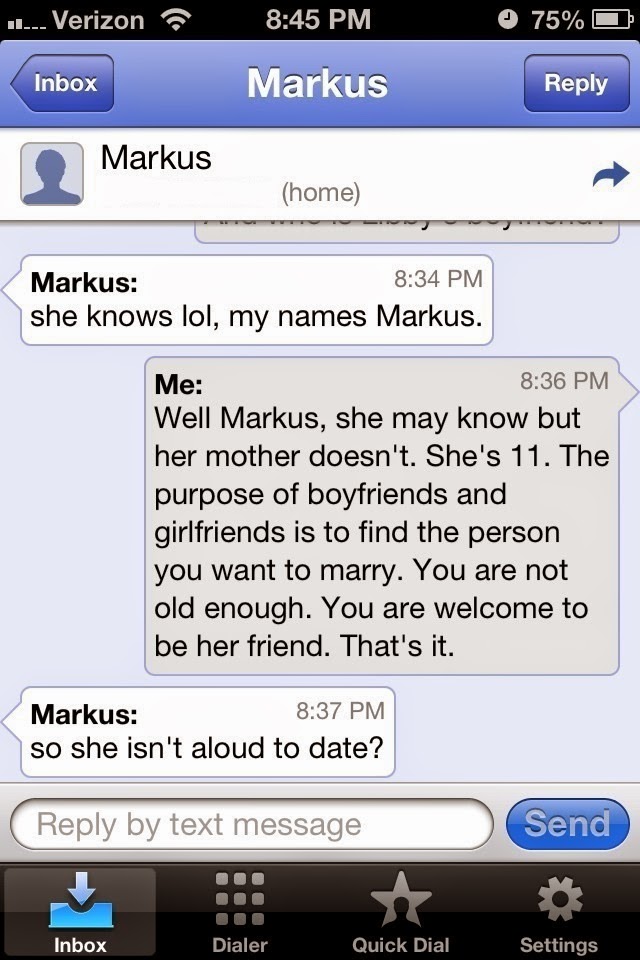 I ignored the fact that he used the wrong spelling of “allowed” since he’s probably only 11 (even though my daughter can spell it just fine) and focused on the fact that he doesn’t seem to have a problem with 11 year olds dating. I know dating at that age means something completely different than dating at 17 or 21, but I still have a problem with it. In fact, at this point I was now picturing some miniature, mack daddy-wannabe showing up at my house on his Huffy and offering to give Sassy a ride on his handlebars. 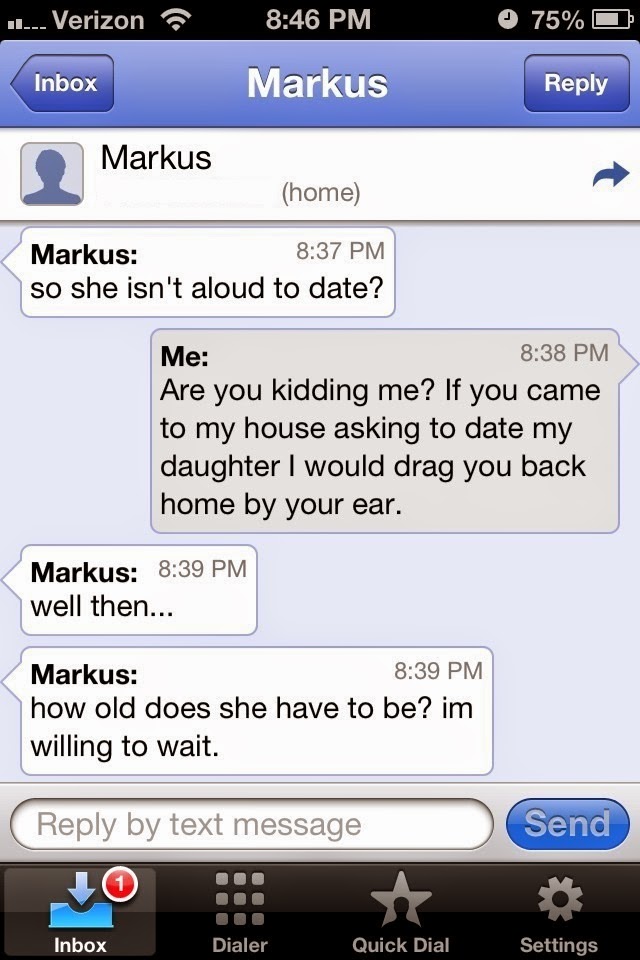 You’re willing to wait? Yes, Sassy is absolutely worth waiting for but she’s not allowed to date until she’s older…MUCH older. You’re going to wait a few years? What kind of stalker are you? And what exactly is it you think you are waiting for? At this point, according to MC, I went a little TOO Mama Bear…

After I explained that Sassy says she doesn’t know a Markus and asked his last name, he informed me that his “common” name (his quotations, not mine) is Mark. Sassy was even more lost when I asked if she knew anyone named Mark. And so I asked again for his last name.

Haven’t heard back from him since.

I’m really hoping this was just someone messing with me. Otherwise I have to keep my eye out for the little lothario who has turned me into a rabid wolverine protecting her young while MC tries to reign me in. What will I do during the teenage years???