MC and I spent an evening at the discount theater as we took in 2 back to back movies. Love date night! One of the movies we saw was the “The Internship”, starring Vince Vaughn and Owen Wilson. They are watch salesmen who find out that the company they work for has folded and they are now unemployed. Left with no options, they apply for an internship program at Google which promises job opportunities for the winners, and, surprisingly, are accepted as interns. The joke comes in the fact that they are old school, pre-social media throwbacks who are out of their depth among shiny, fresh-faced college whiz kids who’ve grown up being plugged into laptops, iPhones and iPads.

Among their little team of interns, which includes their 23 year old manager/mentor, Vaughn and Wilson look like dads coming to check up on their children who’ve been away at university. They just don’t belong. Of course the other “Nooglers” (what they call new Googlers), run around spouting code and html and CSS language that goes right over the old men’s heads. But while Vaughn and Wilson’s characters have a steep learning curve when it comes to computers, they have something the other kids don’t: people skills. They have been salesmen for years and are adept at the art of customer service and relating to other humans. They know how to motivate and connect people and ultimately succeed in pulling their little ragtag team of misfit Nooglers together.

The point being that it takes all different types of skills and talents, working together, to make a team successful.

Yay for message movies! Now we’re all happy, happy, joy, joy and we can all get along.

I least, I thought we could.

Jump forward 12 hours and I’m sitting in a meeting at work with 2 of my bosses and the other 3 writers on our team. We are behind in production and are getting a dressing down as well as a pep talk from the head of our department. As they are trying to motivate us to work harder, the other female writer pipes up with the suggestion that she is willing to put in extra hours to get this done even faster than expected and maybe the rest of us could, too.

Sounds reasonable, right? So why did I want to punch her in the throat? Possibly because I think I’m becoming ageist. Either that or I’m getting old. (Sadly, I don’t know which is worse.) The thing is, she’s young. Really young. Like, maybe all of 20. She’s this cute, perky little thing with her I’m-so-alternative-I’m-hip lip piercing and her tattoos. (Yes, I have tattoos, too, but I’m sure somehow they are “mature” tattoos.) And while we are on the same team, I have to admit that it grated on my nerves a bit to have this KID making suggestions on how we can do better work.

When did I become a bitter grown up?

I mean, I have no problem with teens (other than the whole sagging pants thing). I don’t complain about kids loitering at the mall or listening to loud music (Although, now that we’re on the subject, when did movies get so loud?) and I’m not intimidated by crowds of teens hanging out on the sidewalks. So why do I have a problem with this girl, who is barely out of the teen years herself?

During our 6 week internship, we were offered prizes such as gift cards and laptops and iPods depending on our production. Perky Girl usually won the prize of the week as she was putting in 10-12 hour days because, in her words, she “had nothing else to do”. I, on the other hand, was working full time along with taking care of my 3 children and my husband, and was involved with sports and Girl Scouts. I was lucky to get in 3 hours in a week and then I would just work like crazy on the weekends and cross my fingers that they wouldn’t kick me out of the program for low production.

I believe my problem started back then, when I realized there was only one other intern there who was over 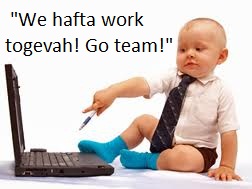 the age of 35, and most weren’t even over 25. Now we’re down to 4 and I’m the only one over 30. The others don’t even look like they are old enough to drink but are probably closer to 25. Did I mention that NO ONE in the office is my age? With the exception of my boss’ boss, who I’ve only met once, I’m the oldest person there. I’m fairly certain I’m the only one with children. (Did I mention Perky Girl is closer to Howdy’s age than mine?) So how did it happen that, while I’m in constant amazement of my age when I am certain I am so much younger, I am suddenly feeling old?

It has no bearing on my ability to do my job, that’s not an issue. But I had to bite my tongue when she suggested we put in extra hours to get the job done faster because I didn’t think pointing out the fact that I have a household to run and children to care for would compute with these young and unfettered little pups.

I guess I can admit that I really don’t have a problem with Perky Girl; she’s a very nice person and a good worker. My problem is the fact that, as MC was kind enough to point out, at work I am the Vince Vaughn. And how appealing does that sound?