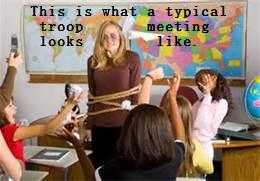 I recently read that a study shows 69% of parents say raising boys is easier than raising girls. I happen to have 2 boys and 1 girl and was one of 3 daughters myself; I would have to agree with that claim. And if any additional proof was needed, I would encourage any doubters to take over my Girl Scout troop for the weekend and then tell me how much easier boys are.

Last weekend I took 11 of my 14 Girl Scouts on our first primitive troop campout. This meant tents, campfires, no electricity, bathrooms 3/4 of a mile away.  For (some) grown-ups, this is an adventure. For 10 and 11 year old girls, this is a true hardship. Most of the girls got to experience their first campout in February at an official Girl Scout camp–which meant cabins, a kitchen, close bathrooms–but this was taking it up a notch. I tried to prepare the girls and I answered all the questions that came up. And I mean ALL the questions, including:

“We have to set up the tents? I thought there was some kind of robotic…thingy that did it for us?”     Really?

“What do we do if a bear attacks us in our tent and then the tent is torn up and we spend the rest of the night cold?”     First, there are no bears. Second, if we are attacked, being cold won’t be our first concern.


And my favorite…
“Can we bring makeup?”     You are 10. You shouldn’t even be wearing makeup! Who are you going to impress–the squirrels?


Since I had the majority of the gear and all of the food, Suzy was loaded to capacity when we pulled up at our meeting spot. In fact, I had to unload totes and tents and folding chairs just so I could make room for 2 girls that I had to pick up. Once we were finally packed up and ready we hit the road–only 30 minutes late. Of course, that combined with weekend rush hour traffic and an accident right as we got on the freeway put us even later. We arrived at our site with about 20 minutes of day light left. Pretty much just enough time to scout out where we were going to pitch the tents.

I have to say that I’m impressed at how well the girls came together to put up the tents–even ones they weren’t sleeping in. They worked really well the whole weekend whether it was on cooking duty or washing dishes or hauling all of our stuff in–and there was a LOT of hauling. Did they do it without complaint? No, but neither did us adults. The fact that they stuck it out though makes me proud of them.

And what would an outing be without learning something? We taught the girls how to tie knots (Real knots with names, not just jumbled messes. Impressed?), how to build their own campfire, wash dishes without a sink, put up a tent and identify poison ivy. And they actually taught me a thing or two as well. 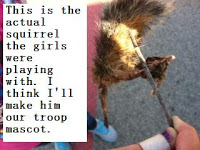 Like, if it’s dead, it will entertain them. It started with a petrified squirrel carcass at the school where we met before heading out and continued with a dead baby crawfish. I’m not sure why dead things fascinate them, but there ya go.

My girls aren’t the only ones who missed the concept of “roughing it”. In the mornings, with 15 girls standing in line to use the 2 bathroom stalls, we had to fight through the crowd of high school girls who were there on a class trip. See, they were all using the ONE outlet in the entire camp to STRAIGHTEN. THEIR. HAIR. I am not kidding. They had 2 flat irons plugged in and were taking turns in front of the only sink and mirror to get all gussied up. I remember camping when I was in high school. It did not involve fixing my hair or applying makeup that I would then just sweat off.

I have come to think of these girls as “mine”. They are MY girls. And as such, when they come at me with attitude, I respond as if they were my kids. I admit that I went “mama” on them once or twice. In their defense, they went to bed really late, we wore them out, they were tired. In my defense, I was up even later and have zero tolerance for kids getting snippy with me. Deal.

I have a lack of fear of things in the woods. The first night something came exploring through our site, growling and sounding a bit put out that we had secured all the food and trash. At least, that’s what I’m told. I slept through it. I even slept through my tent-mate and co-leader trying to wake me up when she was freaking out. I even braved the walk to the bathroom at 11pm at night with nothing but my little flashlight between me and whatever was following me in the brush because it meant I didn’t have to wait on 11 girls to pee first.

What I also discovered is that if you present it right, you can get girls excited about poop. We played a Nature Bingo game. The girls were given blank Bingo cards that they then had to fill in with nature things they thought they might see. Animal poop was one of the things they came up with. And they got really creative with it, too, using big words like “scat” and “feces”. I’ve never before seen girls go running toward their friend after hearing that friend shout, “I found scat!”

Something that I could’ve done without learning is that I have a lot more endurance than I thought. When I say we had a lot of gear, I mean we had hundreds of pounds of stuff that had to be carried in and out. We couldn’t pull right into our site–we had to park about 3/4 of a mile away and walk it all in. We were smart and brought dollies to load everything on but when the path wasn’t rocky and uneven, it dipped into a sand trough. Not fun. We had 3 coolers (1 filled with 8 gallons of drinks along with much of our food), 4 tents, 17 chairs, 6 totes, 2 campstoves, 2 folding tables, 3 lanterns and a bunch of firewood. There were other things we had to carry in as well as all of our personal gear. We discovered the only way to traverse the path was to strap as much as we could on a dolly and then walk with it being pulled along behind. And did I mention the ancient dollies were so heavy that I couldn’t actually carry one by myself? By the time the weekend was over I’d had a serious workout. Zumba’s got nothin’ on primitive camping.

I also learned that I am a horrible judge of distance. My co-leader and I printed a map of the hiking trails 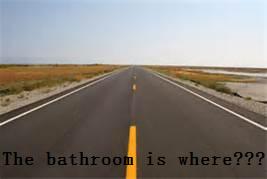 ahead of time and planned out a hike to end at a playground. After walking for 45 minutes and still not seeing a playground in sight, we gave up and turned around. And that 3/4 of a mile hike to our site? We grumbled all weekend because we were told it was only 1/4 of a mile. It sooo was not a 1/4 of a mile. Well, it turns out it wasn’t 3/4 either. See, in an effort to keep my mind off being stalked by woodland creatures on my way back from the bathroom, I counted my steps. 749 steps from the bathroom to our campsite. Then I came home and measured my stride so I could prove to the park guides they were wrong. And they were. But so was I. It turns out we were just under a 1/3 of a mile away.

But don’t tell my body. It still wants credit for that 3/4 mile workout.