0 shares
My history of bad luck isn’t confined to disasters. Some of the more…interesting moments of my life just fall under the category of  “It could only happen to me”. These are the things that, really, could only happen to me. That’s just the way my luck falls. Today’s Flashback is one of these incidents.

When you are pregnant, you joke around with your friends about what would happen if your water broke in the middle of Walmart or while you were walking the mall or attending a PTA meeting. You go through the possible scenarios and it always ends with, “Wouldn’t that be embarrassing?” But you always let out a nervous little sigh of relief because you just know that those kinds of things never really happen. Right? Right?? 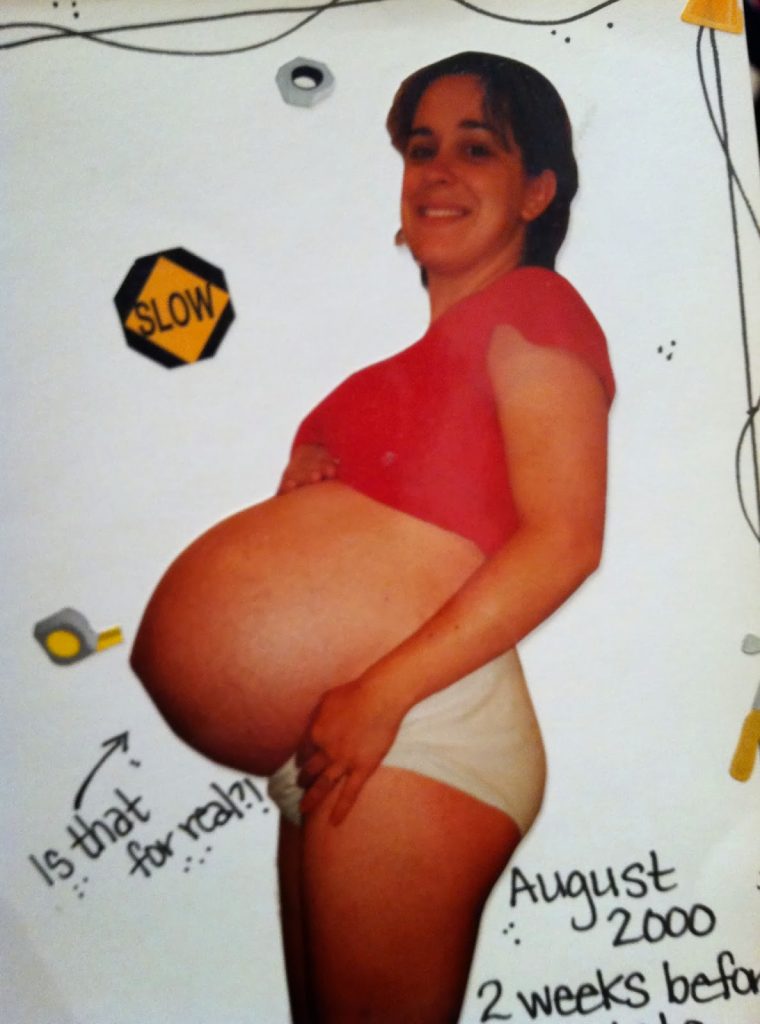 When I was pregnant with Bubba, my stomach looked like I had swallowed a watermelon and got it lodged perpendicular from my spine. I was huge. But only in the front. I still had a waist and you’d be hard pressed from looking at my backside to tell that I was pregnant. I got a lot of “How many babies are actually in there?” comments and I once had a guy pass me on the sidewalk, do a double take when he saw my belly and then shout to his wife to come and “take a look at this!” I am amazed at the sensitivity level of some people.

Anyways, one Sunday MC and I were in church. I was past my due date but nothing had been happening on the labor front so it was just business as usual. In fact, the night before we had attended a hockey game with friends. During service, Howdy was getting antsy so I reached into the diaper bag for his bowl of Cheerios. Maneuvering around that big ol’ belly wasn’t easy and I ended up spilling the Cheerios all over the inside of the bag. With a frustrated sigh I bent down to clean up the mess. As I leaned down, I simultaneously felt and heard a distinct pop. I sat back up quickly, wondering if what I thought had just happened had actually happened. My suspicions were quickly confirmed–my water had just broke. I leaned over and told MC what was going on and we debated about what to do. We didn’t want to make a scene, which rushing out in the middle of service was sure to do. We also weren’t sure what kind of mess I might make if I stood up. I mean, what if my sitting was acting as a dam and holding back the flood, you know? Even if I could be sure that I wasn’t going to be like some sitcom character and gush all over the place, I knew that labor was coming on. Did I really have enough time to sit through the sermon?

We came up with a plan. Luckily our song leader that morning was a man who was very fond of making everyone stand for 3 or 4 songs in a row. When everyone stood up for the first song, we’d quietly sneak out the back and head to the hospital. That was great, in theory, but there were a few monkey wrenches thrown into this plan. First of all, when he finally got up to lead singing, he told everyone they could remain sitting. Yeah, thanks for that. Second, we had Howdy and didn’t want to take him to the hospital. Papa had planned to take him when the time came. Grandma was going to the hospital with us but Papa likes to keep a good 3 mile buffer zone between himself and hospitals so he was more than willing to take on the task as babysitter. As it happened, Papa and Grandma were at church with us that day. On the front row.

Let me take a moment and just tell you something about my mom. (I love you, mother, you know that, right?) She gets a little excited sometimes. And subtle has never been a word in our family’s vocabulary. So we tried to send a whispered message up to her that it was TIME. By this point, a friend of mine who’d been sitting behind us had caught on and was (very quietly) on her way to grab us some towels from the baptistry. As soon as she arrived with my makeshift robe, we were outta there. But only after we got that message to Grandma. We knew the instant she got it because she just about got whiplash turning around to find us. There were quite a few “OH! OH!”s exclaimed at a higher than normal volume and then she was standing up and trying to make her way to us. It took but a second for everyone to follow her line of vision to where I was currently trying to heave my body up off the chair and get wrapped up in towels so that no one could see my wet clothes. Yeah, the jig was up at that point. No one in my family will ever win the stealth awards. We gave up trying to ease out the door and just went with it. We handed Howdy off to my parents and then MC loaded me up in the car and we took off.

It turned out I wasn’t carrying a mini Sumo wrestler or even a surprise set of twins. Just a normal 7lb baby. I was, however, carrying an abnormal amount of amniotic fluid. Once I hit the car, the flood started and it didn’t stop for even a moment until I got into my hospital room. I would not have wanted to be maintenance that day. I drained all the way across the emergency room, down every hall and in the elevator. I left a puddle trail throughout the entire hospital. My car didn’t fare much better and neither did my clothes. It turns out when that stuff dries, it crystallizes–my clothes and shoes ended up in the trash.

I’d always thought that church would’ve been one of the worst places to have your water break but it wasn’t so bad. I mean, how many places would’ve had towels on hand? And my story has lived on in infamy. It’s now a cautionary tale told at baby showers…whether I’m there or not.

But the best part? About a year and a half after delivering my Bubba, I was at church one Sunday and I introduced myself to a young couple that were visiting. The wife looked at me and said, “I remember you! You were the one whose water broke in the middle of service!” Ahh, at least I’m memorable!