0 shares
It’s been a whole month since my last post. I would love to say that it’s due to all the exciting, enviable adventures I’ve been a part of but, alas, that is not the case. Well, unless you count meetings with Bubba’s teachers, last minute school shopping and staring at high school students all day enviable. If you do, I feel a little sorry for you. 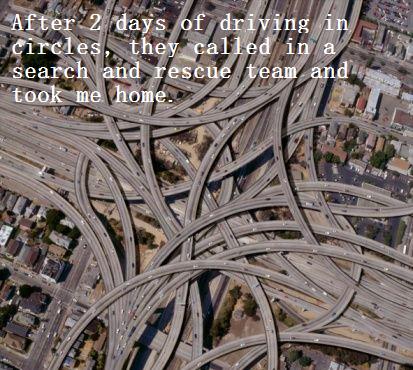 The truth is, it’s just business as usual around here. Until I have to leave my protective little bubble known as Mesquite. I am a smart, confident, capable woman…until I have to navigate the freeways of Dallas. Then I lose all intelligence and sense until I am reduced to a bumbling moron with the IQ of a 3 toed sloth. I no longer know my left from right, much less north from south. I find myself casting curses upon streets, my GPS, other drivers and even the whole TX DOT. I suddenly become capable of bending the steering wheel with nothing more than the strength of my white-knuckled grip. The 90 degree heat in a car with no A/C doesn’t help. The fact that I always seem to be out at rush hour doesn’t help either. If I’m traveling farther north or west than Garland, it’s a pretty sure bet that I will arrive late at my destination, a stressed out, disheveled mess.

I used to get lost all the time and I blamed it on the GPS on my phone. After all, I was following it exactly so it must be the program’s fault. Then I realized that I couldn’t just leave the screen on the “big picture” the entire time–I actually needed to zoom in to where I was located and adjust it as I went. It takes my eyes off the road more but I get lost less, which I believe to actually be safer for my fellow drivers.

I can’t use the excuse as being new to TX because even though we’ve only been here for just over a year, I have lived here previously and should know where I’m going by now. In all fairness, I have been lost in Seattle, too, but at least there’s no where I can get lost there that I don’t know which direction the freeway is. In Dallas, there could be any number of freeways in any direction but for all I know I’ll end up in Houston or Amarillo if I hop on the wrong one. And I haven’t driven on any of them enough to identify landmarks other than to say, “Hey, there’s big, tall buildings. Must be downtown…Now what?”

The actual getting lost doesn’t stress me out; I’ll find my way out somehow, usually with many phone calls to my husband. What does stress me out is that I’m usually running late anyway so getting lost will make me even later. And with no air conditioning, I’m always a hot mess–literally. When I call MC for help, he will locate me on his map and help me get turned around which inevitably leads to me having to cut across traffic to make that left turn that is Suddenly. Right. There. Nothing like cutting off 8 gun-toting Texas drivers to get your heart racing.

When driving to a new friend’s house, it usually takes one trip, sometimes two, before I can get there without directions. It doesn’t seem to work the same driving through Dallas. Whenever I get lost I tell myself I’ll remember how to get there next time. Until the next time when I’m lost all over again.

Maybe this is a sign that I was never meant to drive myself. Maybe I was born to be driven by others. In big fancy cars. With little old men in shiny black hats behind the wheel. Who open the doors for me when we pull in front of my country estate. I’m sure that’s it. Because really, genetics could be the only excuse sound reason for why I’m always getting lost.