An incident occurred on Sunday that reminded me that no matter how hard we try to avoid it, we grow up to be just like our parents. Deny it all you want, but it’s true.

Sunday was an interesting day in our house. In the morning, Sassy and Bubba stayed home from church with me because they had both had low fevers the night before. They were dealing with the tail end of a week long battle with nasty germs but were getting better. I thought it best for them to stay home and take it easy to make sure they were well enough to go back to school the next day. So it was just MC and Howdy at morning service. By the time evening service rolled around, Sassy was doing much better but Bubba only so-so. I sent her off with her dad and brother while Bubba stayed home with me. Service is over at 7pm and at 7:10 I got a phone call. It was Sassy. She was using her friend’s dad’s phone to ask me if I knew where Daddy was. Um, probably in the Family Center where we always meet wondering where on earth his daughter is. She insisted that she’d waited for him but he never showed. I, in turn, insisted that if class got out late she would have missed him and of course he was in there waiting for her and she wasn’t left behind as she feared. We went around like this for a few minutes until she informed me that Mr. H (her dad’s friend) said our van wasn’t in the parking lot anymore. We are good friends with this family and they know our vehicles so that actually sent up a little alarm in my head. Maybe it was time to call MC.

I called him and when he answered I asked, “Where are you?” Halfway home as it turns out. Sassy was indeed left behind. MC promptly turned the car around and went back to get our daughter. He told me that after church got out he asked Howdy if they had brought Sassy with them or not and Howdy said no, so they left. I called Mr. H back who, after laughing at us, said he was happy to wait with Sassy until her dad got there. She was fine, surprisingly no tears. It helps that she was waiting with 2 of her girlfriends. However, anytime she brings up Sunday she refers to it as “the day I got stranded.” 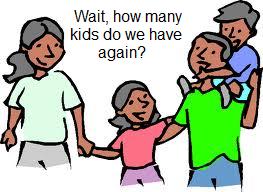 She is in good company, though. See, I was once stranded, too. I was a bit older but I was still stranded. I played volleyball in 8th grade, middle school. I wasn’t all that great at it but it was fun. On this particular day, we had an away game. I will never forget this day because it will go down in the history of my life as the only time I stood out as an athlete. The way our games were played, you could only score if your team was serving and the first team to 15 won, as long as you were ahead by 2 points. When it came my turn to serve, I was nervous as always but I managed to serve it just over the top of the net. The other team assumed it hit the net and let it go. We scored. See, I never could serve overhand but I had a great side arm serve. It took a few serves before the other team caught on that all my serves were like that–just barely clearing the net–but by then we had a few more points on the board. If left up to me, I’m sure I would have bungled the game, but thankfully it’s a team sport and we kept racking up the points. By the time I was done, we had scored 13 in a row. We ended up winning the game!

Needless to say, I was on cloud 9 all the way back to our school. I was so excited that I couldn’t even be bothered to change before showering–I just stepped in fully clothed in my uniform. I did finally change but it was with wet underclothes that I dug out just enough change to call my dad from the pay phone and told him I was ready to be picked up.

The euphoria lasted while I waited with my other teammates. One by one they all got picked up until I was the only one left. I waited. And waited. The sun started going down until it was completely dark. And still I waited. I lived close enough to the school that had it been daylight, I could have walked home but I know better than to leave the relative safety of a lit school to going walking home in the dark. I started to worry, of course. Had they forgotten me? I wanted to call but I didn’t have any more change. By this time, that spur of the moment dunk in the shower seemed like a very poor idea considering I was now damp and freezing, and my joy over our win had disappeared along with the sunlight and warmth.

By the time 8 o’clock rolled around, I knew I had to do something. I was cold, alone, in the dark, and I’m not ashamed to admit, a little scared. I finally used to pay phone and called my house collect. My mom answered. It turns out my dad had forgotten that I called, had never left to pick me up (obviously), and had never passed along the message. Everyone just assumed I was still at the game or up at the school doing…something. Before you take my dad to task over this you should know something. On a good day my dad’s memory resembles Swiss cheese. Between years of sniffing paint fumes without wearing a mask and drinking beers with all the guys, not to mention more than one head injury, those memory cells have lost their elasticity. (Sad to say but I seem to have inherited his memory but without the fumes, alcohol and concussions to blame.) I should have known better (and have since learned my lesson) than to leave an important message in my dad’s hands. Mom was understandably upset when I told her that I had been waiting alone at the school for hours. She dropped everything and came up to get me.

I really do understand how both incidents happened and it is no reflection on the ones who were left. I believe with each generation we are cramming more and more information into our brains that we are expected to keep at the forefront at all times that it makes it easy for things to just slip right off our memories like they are Teflon-coated. Neither Sassy nor I were permanently damaged but I guarantee she’ll be telling the story of how Daddy left her stranded at church for the rest of her life.